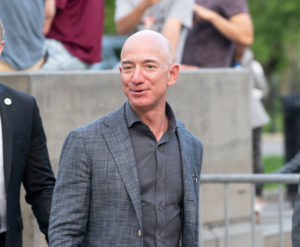 One of the richest and smartest people in the world is Amazon’s Jeff Bezos.  He built the world’s largest retailer from scratch.  There were lurid details about the end of his 25 year marriage to MacKenzie Bezos prior to their filing for divorce in January.  The estate was worth an estimated thirty-seven billion dollars and there were those that expected a costly, drawn-out proceeding costing millions of dollars.  Instead, after just four months, Jeff and MacKenzie announced they had negotiated an amicable divorce settlement that allowed Jeff to retain control of Amazon and awarded MacKenzie a substantial separate estate.

How Did They Do It?

Nobody is talking.  These are smart people that didn’t want any more of their dirty laundry aired in public. Smart people know that privacy is important and that is one of the benefits of using the Collaborative Divorce process.  This is one of the indications that Jeff and MacKenzie may have opted for collaborative divorce which allowed them to resolve their marital issues in a cooperative, efficient, and cost-effective way rather than fighting for years in court.  A collaborative divorce avoids formal discovery and contentious court fights and allows a couple to resolve their disputes themselves rather than turning their futures over to a judge or jury.

Benefits of a Collaborative Divorce

The first step in a litigated divorce is to file an original petition and serve it on the other spouse.  Next comes a hearing before a judge to decide where the children will live while the divorce is ongoing, establish a visitation schedule until final settlement or trial of the case, and determine how much temporary spousal support or child support will be paid by one spouse to the other until the divorce decree is entered.  Following the hearing for temporary orders, attorneys exchange requests for discovery and fight over production of financial documents which can consume substantial time and money.  Once discovery is complete, the attorneys may agree to hold settlement negotiations or the court will order the parties to mediation in an effort to settle the dispute.  If the parties can’t settle their dispute, the case is set for trial.  At trial, both parties make opening statements, put on witnesses, introduce evidence, and make closing arguments.  Then, the court or jury decides the issues of the dispute, including who will have custody of the children, how the marital estate will be divided, the amount of child support to be paid, and what amount of spousal support, if any, is justified by the circumstances of this marriage.  Finally, the attorneys draft the Divorce Decree and Agreement Incident to Divorce to reflect the orders of the court.

A Collaborative Divorce is Better

Jeff and MacKenzie Bezos have proven in many ways through the years of their marriage that they are extremely smart people.  They also proved how smart they are in how they chose to handle their divorce.